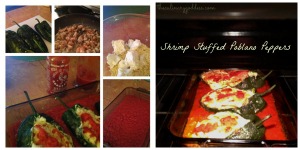 You can fill these beautiful, dark green beauties with whatever your creative culinary mind visualizes. Some people don’t like shrimp, so you can simply substitute chicken, beef, pork, or even sausage. Also, some like to wrap or top it off with bacon, it is entirely up to you. This recipe is one of my husband’s favorites.

For the vegetarian version, you can use rice, or cous-cous, and/or other variations of roasted veggies they culinary creative world is truly your oyster..;-)

The Stuff you need to make it:

What to do with all the Stuff:

I am currently cooking for 2, but have no problem making more, so we have delish leftovers 😉

Join 8,629 other subscribers
Follow The Culinary Goddess on WordPress.com
My Foray Into Food Storage

Discovering art in everything

The lowcarb lifestyle made easy